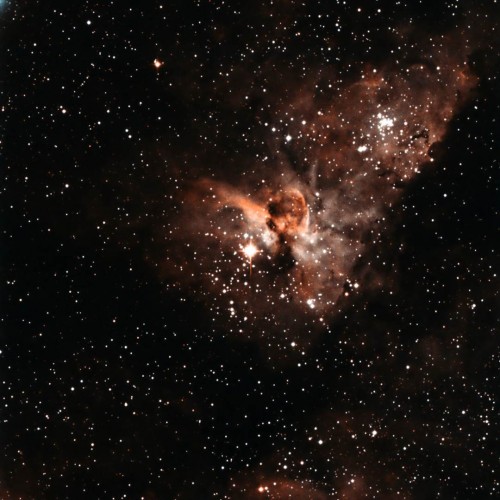 Keyhole Nebula, a detail of the Eta Carinae Nebula in corrected false color (based on g’ r’ i’ data), acquired by the telescope of the University of Antofagasta (Chile). Credit: U. de Antofagasta.

The 24-inch Chakana Telescope is managed by the University of Antofagasta. It will focus on the research of exoplanets and minor bodies of the Solar System.

A new telescope is in its final stages of setup in the Antofagasta Region (Chile), which is a location well known in the astronomical communities for the presence of large observatories such as Paranal and ALMA. The new instrument, called Chakana, has been installed in the Ckoirama Observatory, the first Chilean state-owned observatory under the high-quality skies of the north of the country. The new observatory has been developed by Universidad de Antofagasta, while the equipment has been set up as the result of a joint international effort by a team comprising local researchers and astronomers from UCL (University College London,  UK).

“The two main drivers of this project were our interest in contributing to research on planetary sciences and in gaining practical experience in engineering a new observatory”, explained Eduardo Unda-Sanzana, Director of the Astronomy Unit at Universidad de Antofagasta. He added that the scientific goals of the project are the intensive analysis of exoplanetary transits and the research on minor bodies of the Solar System. “However, we also gained a lot of technical experience thanks to the decision to design and build our own astronomical dome, which led us to work closely with colleagues from informatics, electronics and mechanics”, remarked Juan Pablo Coque, the coordinator of the construction. 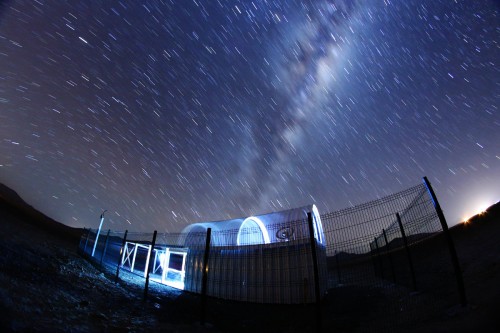 Ckoirama Observatory during the opening of the dome and under the Milky Way. Credit: U. de Antofagasta / F. Char.

The first light, the moment in which a telescope produces a professional image for the first time, was reached during the visit to Chile by Steve Fossey and Marco Rocchetto, both from UCL. The researchers from Universidad de Antofagasta agreed with the visitors in using the same systems of operation employed by UCL’s University of London Observatory. The chosen target for the first light image is the Keyhole Nebula, a detail of the Eta Carinae nebula, which is approximately 8 thousand lightyears from Earth. “A nebula resembling a keyhole seems appropriate when you imagine that your observatory is a key to gain access to the secrets of the Universe”, said Unda-Sanzana. The name “Keyhole” was first used by the English astronomer John Herschel in the XIX century.

“Ckoirama”, which means “twilight”, is a kunza word, from a language spoken by the original inhabitants of the region. “Chakana” is a quechua word to which several different meanings are attributed. One of the most accepted meanings is “bridge”, and the word seems to have been used to denote a specific star, likely located in the Orion constellation. The names were the idea of Daniela Pollmann Fleming and Eloisa Paredes González after a public call for ideas of names for the observatory and telescope. 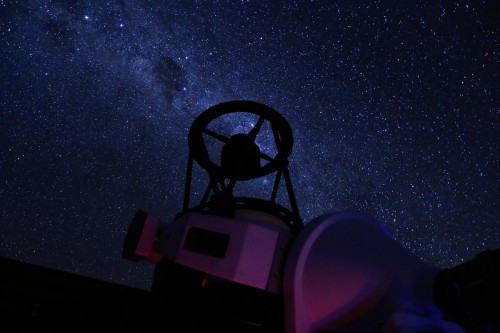 The development of the Ckoirama Observatory used contributions by the Universidad de Antofagasta, and has also received the support of the CONICYT-QUIMAL fund (including Dr. David Kipping, Harvard-Smithsonian Center for Astrophysics), the FNDR Región de Antofagasta fund, and the Escondida mining company sponsorship. It has also benefitted from the support of the SEREMI of Economy and the Direction of Roadworks. In addition to research, the observatory will also support visits by the public, according to a program that will be announced during the second half of 2015. 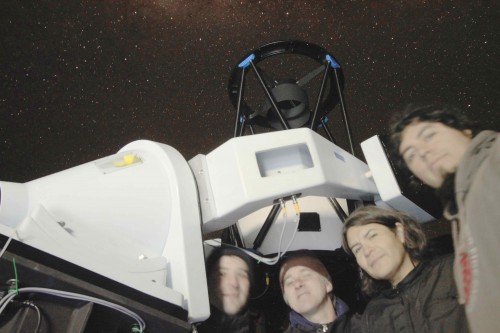